The past two weeks have been a whirlwind. It felt something like that outdoor drinking game involving a wiffle ball in which the batter is required to chug a beer, place their forehead to the end of the bat and spin around x amount of times before proceeding to swing at the ball being lofted toward him or her….Or, at least, that is what I imagine it would feel like if I was able to engage in even one of the first couple steps without throwing up or passing out.

Needless to say, the recent and intentionally uncharacteristic eventfulness of my life had me spinning in circles. It wasn’t until the hoopla had subsided and I had a chance to catch my breath and reflect that I realized I had been spun in a pretty impressively precise full circle.

Four years ago I stood at the head of Alumni Chapel at the Hill School in Pottstown, PA to deliver a short speech on my 19th birthday. “Chapel talks” have long been a senior privilege in a boarding school rife with tradition. Therefore, I felt a sense of pride and thankfulness in addressing the Hill family from the pulpit that morning. I took this exciting and unique opportunity to address my school to explain why I was turning 19 that day, a year older than a typical American 12th grader, and how I ended up at Hill. This necessitated an abbreviated, albeit honest, exposé of the unexpected onset of a chronic illness that derailed my high school career and college plans following a trip to South Africa as a student-athlete just two years prior. My goal wasn’t to garner pity, but rather to reveal a truth about me that few knew because the only observable differences in me were elevator access, athletic exemptions, and various accommodations.

Four years of friendship flew by with this guy…

Just a couple weeks later, on a short weekend visit home, my dad asked if I would be interested in running the famous Philadelphia Broadstreet 10-Miler the next morning. Thanks to the intensive physical therapy that originally got me off of bed rest and maintained during my time at Hill, I felt in decent enough shape to give it a go. I felt sorry for my dad’s colleague who had injured himself badly enough to warrant a forfeiting of his “bib” for the race, but I liked the idea of running alongside my hero through the city for which he had so much pride.

Fast forward to the very recent past: just last weekend was my 23rd birthday. A few days earlier I spoke publicly about my life as a college student with Dysautonomia and my various co-morbid autoimmune conditions in an attempt to raise awareness about invisible illnesses in the Notre Dame community. The campus-wide campaign sought to teach classmates, professors, and administrators more about what it is like to live with a sickness no one can see. The panel I moderated in the front of a lecture hall was the first time I stood in front of a crowd to tell my story since my 2013 “chapel talk,” this time an even more abbreviated version. The turnout for the event was humbling and moving. I will never be able to express enough gratitude to all of the people who showed up at 7pm on a school night to show their support. 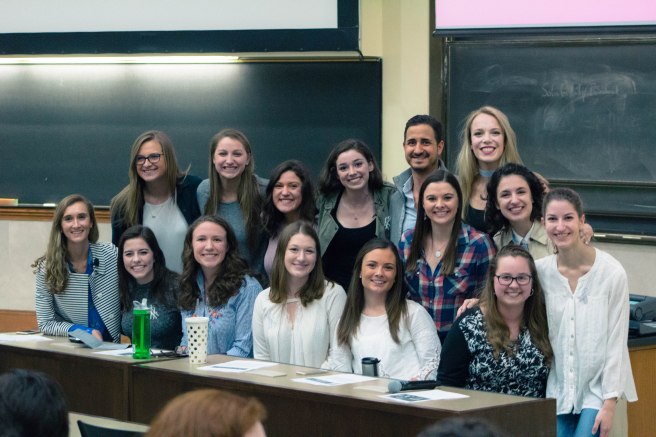 The aftermath of the day wasn’t pretty, and it caused me to seriously question whether my body would bounce back quickly or sufficiently enough to allow me to run the Holy Half, Notre Dame’s annual half marathon that I had hoped to run last Saturday morning. I went to bed the night before uncertain if I could handle the race and, although I bundled and laced up to run the following morning with the intention of running, I was still largely unsure whether it was feasible. However, inspiration abounded from my dear friend whose injury was yet again the reason I was gifted with a racing “bib,” her amazing mom who cheered so emphatically throughout the day that she sadly sustained her own injury, a South Bend sun that shined uncharacteristically strong, reflection on people near and dear to me, and finally, the chance to cross the finish line again, hand-and-hand with my hero. 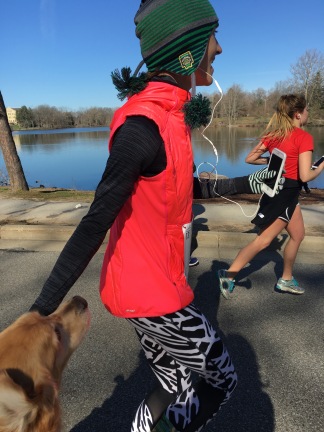 Back in 2013, during the spring of my senior year, I hadn’t specifically trained for the distance my dad was asking me to run, so I could have used the fear of it being too much for me to handle physically as an excuse for not trying. Instead, I did something that I only now realize (since a musing during the race last Saturday, to be precise) has been my strategic approach to everything I have accomplished since I fell ill in 2010. I lost a lot of faith in myself and in the certainty of the future when I was blindsided by the onset of my condition and my life was turned upside-down. As a result, I struggle mightily to believe in my capability and to trust that whatever tomorrow brings will be manageable. However, the approach I developed is one I employ every day, and I cannot overstate its value and the positive impact it has had on my life. It’s not heroic and certainly doesn’t require superhuman will or strength. Given the unpredictability of my symptoms, if I let the fear of not knowing whether I was going to be able to complete something prevent me from starting it, my life would be stagnant…so, I simply give myself the benefit of the doubt.

I don’t let myself wonder how well something will turn out because I might end up in the bathroom unable to see it through to fruition. I don’t contemplate the success I will achieve on a project because who knows if I’m going to be healthy enough to submit it on time or present it in class. I don’t try to predict my semester grades because I could end up home in the hospital on medical leave any day of the week. As sad as this sounds, I don’t dream about an ideal career or the picture-perfect family because so many aspects of those realities are currently unattainable. This may seem dismal and depressing to live so minute-to-minute, but the appreciation for the present moment coupled with a benefit of the doubt has done wonders for me. It has gotten me within mere weeks of graduating on time with my class this May, and as anyone who has followed this blog knows, that in itself is miraculous.

Invisible illnesses and this reflection are alike in the way they challenge people to consider that which they cannot see, to delve deeper than the surface. Therefore, even though these past weeks so picturesquely mirrored this time four years ago, I trust the resemblance is far more nuanced than first glance. What I did may look eerily similar, but how I felt doing it was profoundly different. What I said might have sounded the same, but the intent behind sharing my experience was subtly, but importantly, different. Today I celebrate the similarities and differences of these weeks with four years between them. I cherish both the similarities: the family I’ve held dear, the friendships I’ve treasured, and my faith that often sustains me. And I appreciate the differences: the growth I’ve experienced, the lessons I’ve learned, the knowledge I’ve gained, and the progress I’ve made as a result of giving myself the benefit of the doubt.

I wouldn’t mind if sometime over the next four years I rid of my public speaking anxiety. I have a team of doctors who would be thrilled if my autoimmune neuropathy halted and my health improved to the point that I could run the Boston marathon four years from this Easter Monday.

But, if none of those things happen, I will be thankful for my family, my friends, and my faith. I will honor them by giving myself the benefit of the doubt.